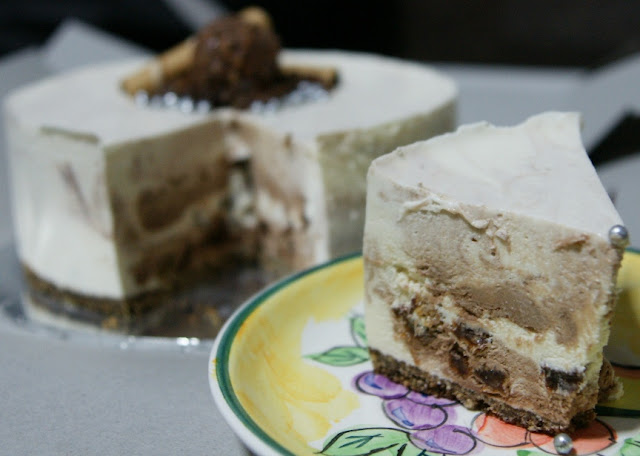 Since I have started my baking journey and set up my mind to make birthday cakes for my family and closed friends, to make the non bake rum &a raisins cheesecake for JQ's has been made up in my mind. This is because both of us enjoy every much on rum & raisins ice-cream from Anderson Ice Cream and I had noticed that this is 1 of the flavour that he will definately order whenever he patronised Anderson.

I was not able to give him the cake on the actual date of his birthday as he was not in Spore then, he will only be back 1 day after. Therefore I had planned to make the cake a day before his arrival and upon his arrival, he can route to my place to collect the cake from airport before heading home (since my house is so near to airport so this arrangement will not cause any inconvenience). 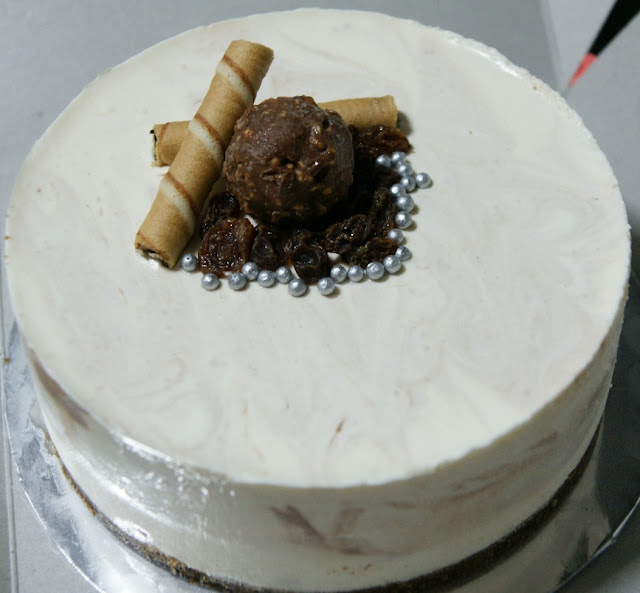 However due to I am maidless now and I had tons of things to settle when reached home from work so I was not able to make the cake at night. I only managed to prepared and chilled the biscuit base, the rest I have to do it by next day morning before I go to work. Thus I has set the alarm at 5am so that I can finish the cake making by 6.30am to settle my dear princess to school and myself to work.

I waked up at 4am, cant go back to sleep anymore so I woke up for cake making. However the cake was still not firm enough after freeze for less than an hr so I ws not able to remove the cake from the cake tin and do any deco.

Luckily JQ's arrival time was 7.50pm so I was still able to rush home after work from office (west to east) to settle the cake before his collection. I still have to practise more on swirling the marble pattern as it was not visible at all :( But I bet JQ was touching :P, he even shaked my hand to thank me ha ha ha. 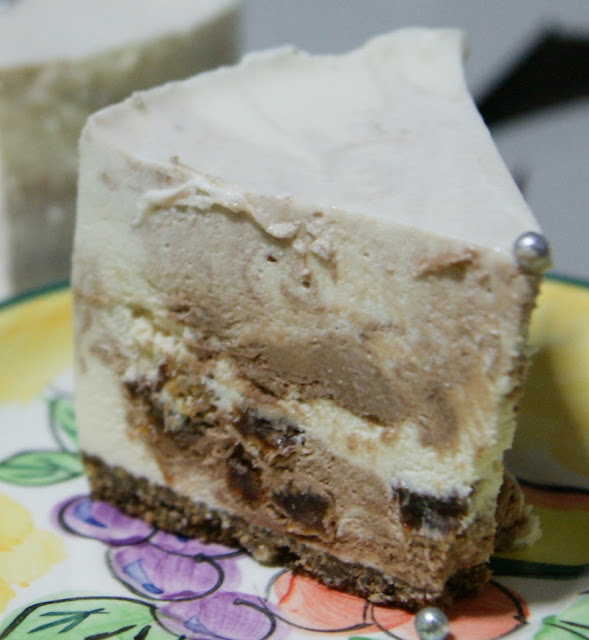 It was night time when the cake was done so I was not able to take a clear pix with my camera as dear husband was still not home yet. So nice of JQ helped me to take some photos on the cake and sent them to me.

Method:
For basecombine crushed chocolate marie & diagestive biscuits and butter together in a mixing bowl. With the back of a spoon, press and smooth evenly the biscuit crumbs onto the base of 6-inch springform pan. Chill in the fridge for at least 2 hour before you get on with the filling.

For Filling
1. Measure water into a bowl and sprinkle in the gelatin (without stirring with a spoon). Set aside to allow the gelatin grains to swell (10 mins) before setting the bowl over a pot of simmering hot water. Stir with a spoon and once the gelatin melts, remove the bowl from the pot and set aside to cool to room temperature.
2. Melt butter and chocolate in a bowl over a pot of simmering hot water
3. In your mixer, whip cream till stiff peaks form, chill.
4. In a mixer (no need to wash after whipping cream) , cream the cheese and sugar on high speed till smooth, beat in white vinegar and vanilla and follow by gelatine mixture.
5. Fold in whipped cream and mix well.
6. Remove tin from fridge and pour about 1/4 of batter into chocolate mixture, stir to mix.
7. Mix in rum & raisins with white batter.
8. Pour about half of white batter into tin, add 3/4 of chocolate batter, swirl to combine.
9. Add other half of white batter, top with remaining chocolate batter, swirling to marble patterns.
10. Chill overnight.
11. To serve, run a knife along the sides of the cake, unmould, and slice.

Verdict?
JQ sms me to tell me that the cake is very nice, he cant wait to taste the cake and ate the cake at 11pm+ after he had settled at home.:)
Posted by Bakericious at 9:30 PM