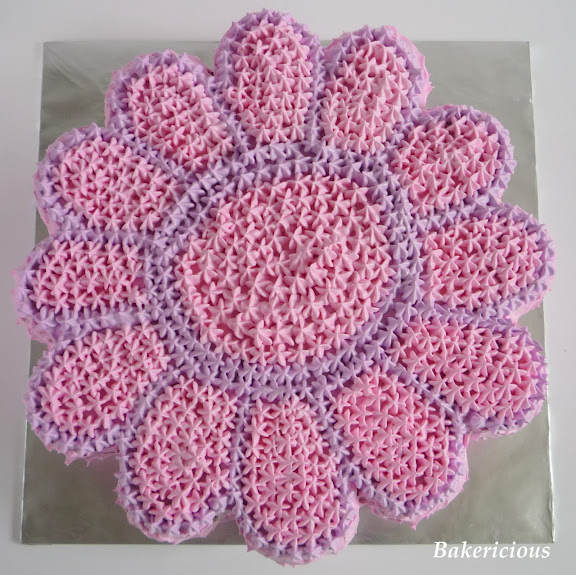 When I asked her what cake she want then, she requested for flower shape cake and she named all her requests. I was having headache when hearing that, trying to persuade her to look at barbie doll cake but she was very persistance on her choice. Well, what a mum can do since can't convince her daughter so I gave in and promised to give her a flower shape cake she want. 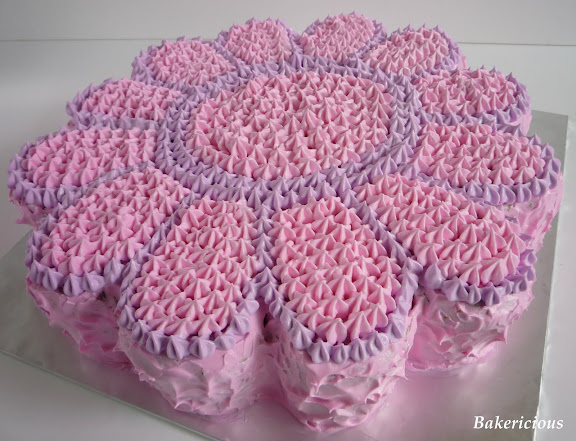 I cannot find flower shape cake pan in Phoon Huat and do not want to waste $ and storage space to the equipement that hardly will be used. Thus I decided to bake a 10" round cake and trim the edge into petal shape. However things didn't work out as my plan, when I trimmed the cake, I realised the cake will be too small and insufficient to feed 15 mouths, the no. of guests that will be celebrating dear daughter's birthday.

I was panic and headache, squeezing all my brain juice and finally, decided to bake some cupcakes to put around the round cake to act as petals. The cake became so huge after adding the cupcakes but more better than less that insufficient to serve the guests.

The cake didn't come out nice after I frosted a layer of whipped cream , the petals dun look equal and balance and the whole cake just dun look exactly like a flower. Especially the side of the cake. I just can't frost it smooth due to my lousy frosting skill so I had no choice, use the back of a spoon to create the spiky look. 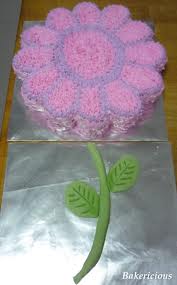 I felt so stressed and depressed, I really cannot imagine presenting such an ugly cake to the guests :(. But I consoled myself that the cake might look alright after I pipe the star patterns to cover the surface of the cake. True enough, piping of patterns really can cover most of the flaws of the cake :). At least, I felt so relief and can smile throughout the day heeheehee...

Dear daughter also requested to have stem and leaves for the flower shape cake, so I used flour + water + some green coloring to make dough and shaped a stem and two leaves.


Dear husband said the cake look beautiful and dear daughter love the cake. Sshe said it is exactly what she want, she was so happy. When I shown the cake photos to my friends, all of them were so impressed. 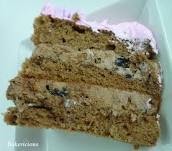 I like Aunty Yochana's chocolate marvel cake that I used for barbie doll cake, so I used the same recipe again.

Method:
1. Sift cake flour with cornflour, baking powder and cocoa powder.
2. Whisk egg white until soft peak forms and then add in sugar gradually and whisk till sugar dissolved and mixture is thick and glossy.
3. Drop in egg yolks, one at a time, making that it's evenly combined before the next addition.
4. Fold in 1/2 of flour mixture and mix well.
5. Pour in oil and milk, mix well, fold in the balance flour mixture and mix till well combine.
6. Pour the mixture into round cake tin and bake in pre-heat oven at 175C for about 45 mins or till skewer inserted in the middle comes out clean.
7. Leave cake to cool on a wire rack.

Beat butter and icing sugar till light. Then pour in melted chocolate and mix till evenly mixed and pour in crushed oreo cookies.

Assembly :
1. Slice cake into 3 and apply chocolate butter cream onto each layer. (As I had trimmed the cake initially for the petals, I just trimmed the whole cake into 8" round shape)
2. Slice the cupcakes into half and apply chocolate butter cream.
3. Place the 12 cupcakes surrounded the 8" round cake.
4. Frost the cake with pink whipping cream.
5. Decorate the cake as your desire.

Verdict?The cake is soft and fluffy, tasted really delicious with the oreo chocolate butter cream. My elder SIL likes the crunchiness of oreo in the chocolate butter cream, she said the oreo given the extra "bites" and added marks to the cake. Dear daughter loves the cake, she ate 2 slices of the remaining cake the next day and even asked for it for the next few days. However the cupcakes tasted a bit dry, probably I had slightly overbaked.
Posted by Bakericious at 10:00 AM