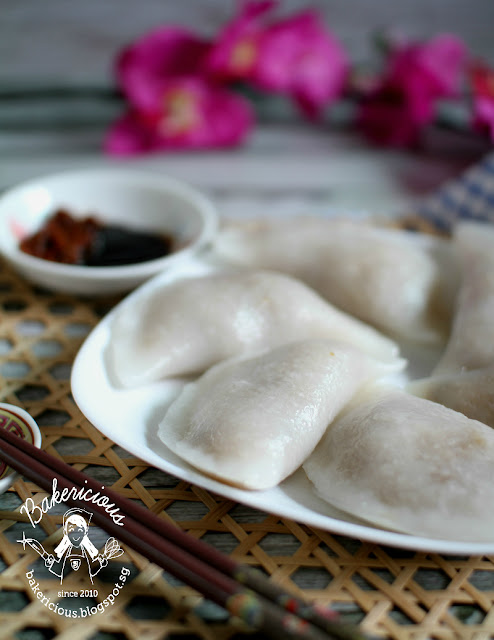 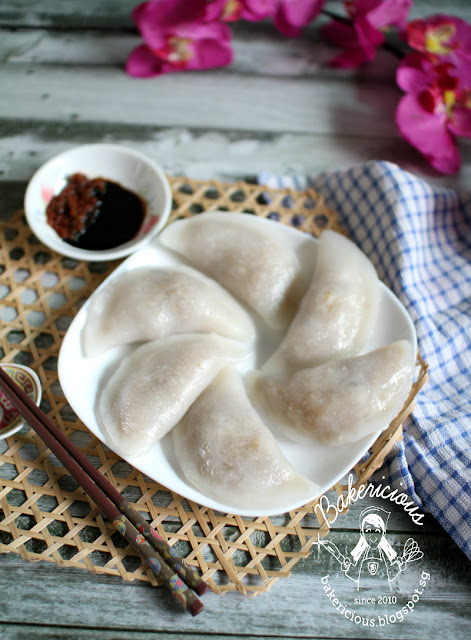 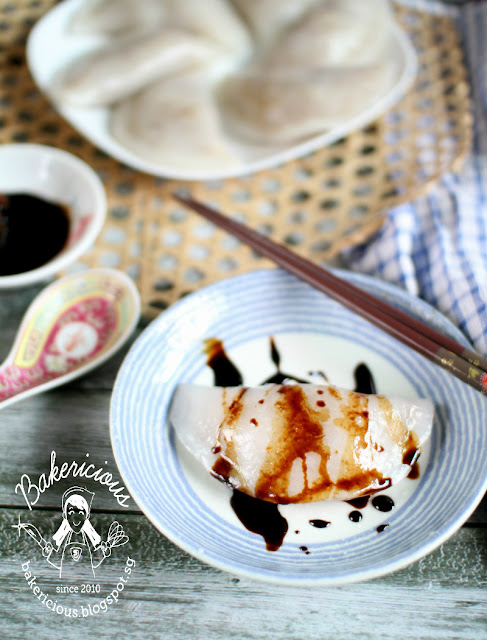 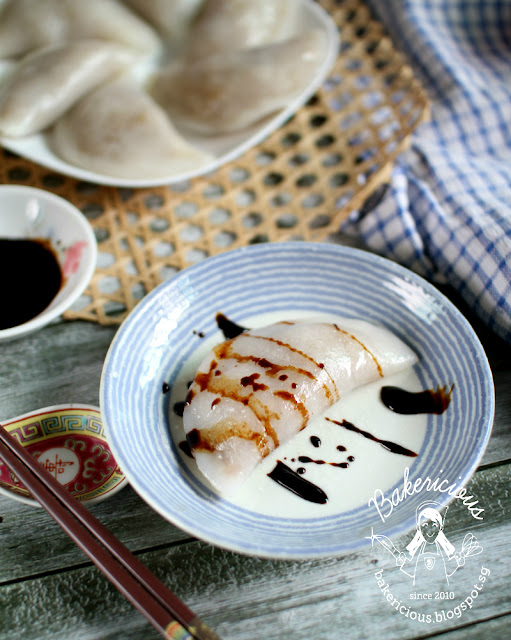 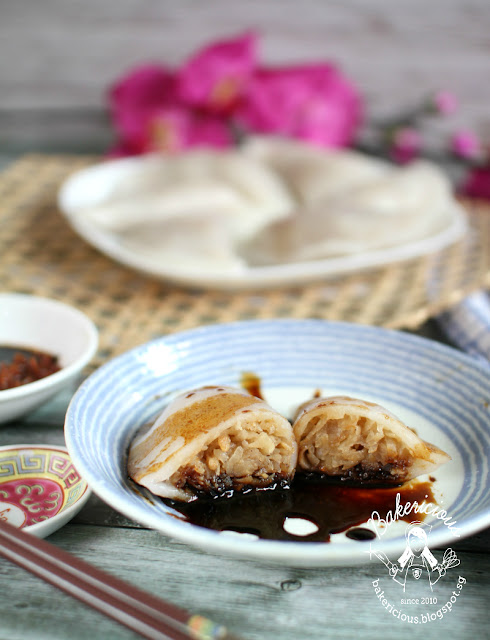 These are the 2nd patch, the skin looks for transparent as I was able to roll the skin even thinner :). 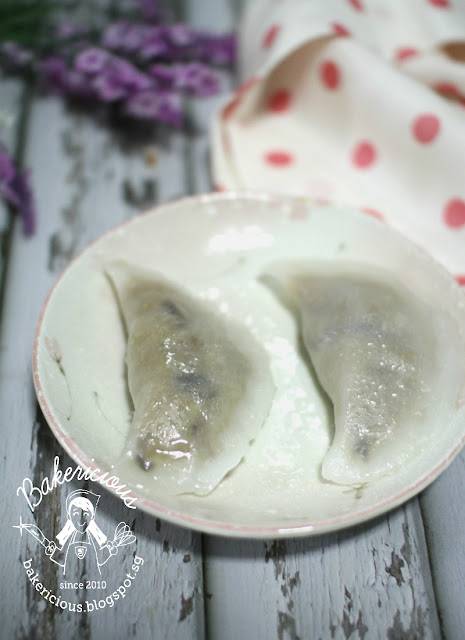 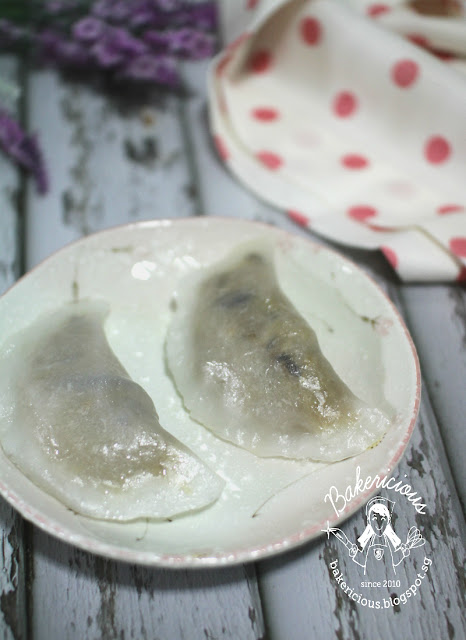 Soon kueh is one food that I always wanted to make since it appears quite frequently in my house but as usual, didn’t attempt it due to lack of confidence. Finally decided to start it for May’s Dim Sum event, really love the outcome, same as siew mai, didn’t know it is actually easy to make, much easy to make the soon kueh skin than to plait the bao skin lol.

I decided to try out Bee Bee's recipe as I remember how tasty was her soon kueh when she brought to one of the blogger gathering many many years ago, which that was the 1st blogger gathering that I had attended.

Method :
For Fillings :
1.  In a wok, heat up 2 tbsp of vegetable oil over medium low fire. Add in the minced garlic and chopped shallots, cook till fragrant. (You can put more oil to make the garlic / shallot oil to keep for using to brush on the kueh)
2.   Add the chopped dried shrimp and sliced shiitake mushrooms and stir fry for a good 3-5 minutes till the mixture is aromatic and slightly brown.
3.   Add in the shredded jicama and seasoning, stir fry to mix well. Cover and cook till the jicama is soften, about 5-8 minutes.
4.   Lastly mix the corn starch and water together and add into the jicama mixture. This will thicken the whole filling.
5.    Scoop out the filling and let cool completely before use.

For Skin :
1.     In a large mixing bowl, add in all three flours and salt. Then carefully add in the boiling water.
2.     Gently but work rather quickly, stir the whole mixture together (you can use the mixer) till it is all combined.
3.     Add in the shortening and again mix well. Let mixture cool down before working with it.

Assembly :
1.     Pinch a portion of dough (you may weigh out the skin portion by portion of about 65-70g each or just eye balled it. Because once you wrap, you will need to trim the sides to make it neater.)
2.    Roll out that skin dough portion into a flat round, then scoop about a heaping tablespoon of the filling on top, fold the skin and seal the sides. Give the kueh a good brush of cooking oil to prevent it from sticking.
3.   Repeat the whole process until all the filling or skin dough is used up.
4.    Steam in the steamer at medium fire for 10 minutes. Remove and brush with some cooking or garlic/shallot oil. Repeat it until all have been steamed.
5.     Serve hot with sweet dark sauce and chili sauce.

Notes :
I didn’t use mixer initially but the amount of the dough is too much and quite difficult to mix well, so at the end I threw it to the mixer and mixed. Thus my suggestion for 1st timer, to ease yourself, use mixer or reduce the quantity.

Do not worry if the dough is not totally sticking together like bread dough, it may appear to be lumpy. Just roll the dough using rolling pin a few times will yield a smooth skin,

I weighed each dough about 65g, flatten it and roll as thin as possible, use a rice bowl to cut into disc shape, this can helps to have uniform size of the soon kueh. Once cut, use rolling pin to roll around the skin to fatten it a bit if you prefer thinner skin. As I want the skin to be thin so I rolled it real thin that it tore a bit for some of the skin after I wrapped with fillings. What I did was to pinch a bit of dough skin and roll thin, batched on the tore skin, like putting plaster on it lol. Funny but it works well, after steamed, the "wound" will not look very obvious.

Make sure seal the edge tightly especially the top part if filling is too much, try to push down the filling to have more space to seal the sides together. If not, the soon kueh will “open mouth” after steam.

My same bad habit of not reading the recipe carefully. I only saw the shortening while in the midst of preparing to make the skin. I almost wanted to replace it with cooking oil but I am unsure how is the outcome, thus give up the idea. However, next time I will try using cooking oil instead to do comparison. Trying to minimize the using of shortening, my small bowl of shortening was given by my buddy which I didn’t use after I got for so long.


During 1st cooking of jicama, I added in a few tbsp of the water that soaked dried shrimp as the filling seem to dry up – my jicama didn’t produce lots of water probably cos I shredded it in the night before and stored in the fridge and cooked it next day morning. When 2nd time cooked again to finish up the balance soon kueh skin, I shredded and cooked immediately, the jicama produced a lot of water.

Verdict?
As I was having flu and cough, I actually can’t really taste it. Dear husband said very nice, only a bit salty but it made it more tasty and he ate 3 at one go. Dear daughter also said nice, after shared with dear husband on his share, she asked for her own serving. However the skin turned a bit hard after cooled, so have to eat it while is still hot. For 1st timer, I am satisfied with overall result :). But next time, I will want to try other recipe for the skin.

This post is linked to the event Little Thumbs Up ~ August 2015
Event Theme : Brown Sugar and Molassses
organised by Zoe of Bake for Happy Kids and Doreen of My Little Favourite DIY
and hosted by Jess of Bakericious

I'm submitting this post to the Best Recipes for Everyone ~ August 2015
Event Theme : Dim Sum
organized by Fion of XuanHom's Mom and co-hosted by May of 厨苑食谱
Posted by Bakericious at 9:39 AM

Labels: Best Recipes For Everyone, Dim Sum, Little Thumbs Up