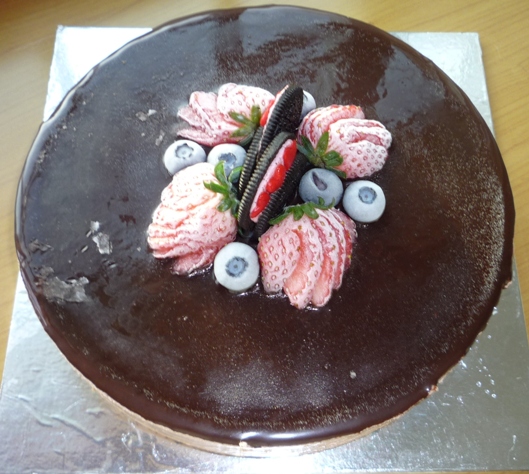 After knowing that my CEO will be coming back (he is currently based at our HQ) at end of the month, I was thinking should I make him a birthday cake since his birthday is coming too.

For staff in my company that worked for more than 10 years, we have special relationship with our CEO as we used to lunch together every day since there were only 10 over staff then. He was then a Vice President of the oversea business unit that based in Singapore then promoted to President, and finally become CEO 2 years ago. I was hired to be his secretary and worked for about 6 months before I was offered to transfer to work in Marketing Dept and has been working in this company for coming 12 years. And my CEO, he joined this company just 3 months ahead of me. Sometimes think about it, it is really amazing that I have been working in this company for such a long long time, should I be able to retire in this company???? :P

Back to the cake, while I have not decided on baking the cake, my colleague has helped me to make the decision. She told our President about it and he thinks that it is a good idea to give our CEO a surprise, thus my dept has to prepare the mini birthday celebration for him. My intention of making a small birthday cake for him become require a bigger birthday cake since the whole division will be joining in this birthday celebration. 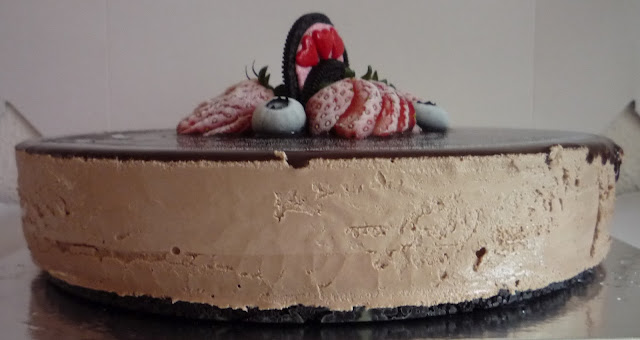 I have been cracking my head since I need to bake him a cake. Chocolate cake forever will not go wrong with it but our division just had a very good chocolate cake from a reputable bakery shop 2 weeks ago for January birthday cake cutting. After much thinking, I decided to go for the non bake cheesecake since the cakes that purchase for our monthly birthday cake cutting are forever baked cakes. And since the whole division will be consuming this cake, I have to ensure that the cake is good enough so I can’t take risk to try on new flavour. Thus I have decided to make the non failure oreo cheesecake since I had received so many good feedback on it. However, since I had made this recipe for so many times, I would like to try something different. So I have decided to add chocolate for the white layer and change the 2 layers of different flavour to another kind of presentation, stealing the idea from here. 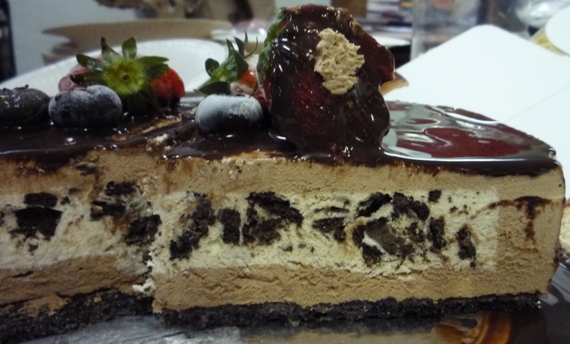 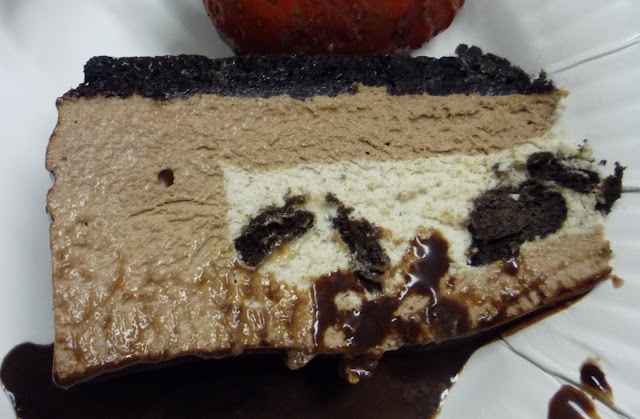 Anyway I am still satisfied with the result although the cake was a bit messy. I was surprised to see the 2 layer of chocolate filling are quite even, which initially I thought the top level will be very thin due to the insufficient chocolate filling. And can you see the melted chocolate ganache, really made the cake so messy :(

Mix them together and press into an 9" springform tin. Chill it for minimum 2 hours.

Method:
1. Beat cream cheese with icing sugar till well combined.
2. Add in fresh milk and mix till well combined. Add in gelatine mixture and mix well.
3. Fold in whipped cream and divide the mixture into 1/3 and 2/3 portions.
4. Fold in chopped Oreo cookies into 1/3 portion and pour into a 7" springform tin and set in the refrigerator
5. Fold in 80g melted chocolate into remaining 2/3 portion.
6. When the oreo cookies filling is set, remove from the 7” springform tin.
7. Pour some (I pour 1/3) chocolate filling onto the prepared biscuit base and put in to fridge to set for about 10 mins.
8. Then place the oreo cookies filling in the middle, top up with the balance chocolate filling mixture and smoothen the top. Set in the refrigerator.
9. For chocolate ganache topping: heat up the chocolate milk and whipping cream, add in chocolate and cook till well mix and smooth. Let stand for 5 mins before pouring on top of the cheesecake.
10. Refrigerate cake again for at least 8 hours before slicing. Serve chilled.


Verdict?
The cake has good review even though is a bit messy due to the melted chocolate topping and some had commented that the cake is a bit too sweet but some said is just nice.
Posted by Bakericious at 10:25 PM