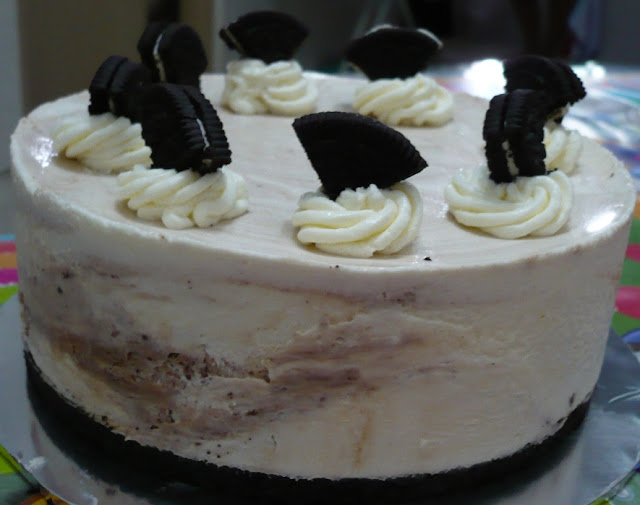 This was the birthday cake that I made for my sister’s boyfriend. I had been cracking my head to decide what to bake for him, flipped through so many times of all the recipes, shortlisted many recipes but still cannot make up my mind. As I still have more than 1kg of cream cheese in the fridge and will be expired in 2 months time, thus I decided to make a cheesecake for him.
After reading through all the cheesecake recipes, I still can't find the recipe that I want. Finally I saw the non bake Baileys Cheesecake recipe from Aunty Yochana's blog, as I do not have baileys at home so I replaced with rum.

I am not sure will this cake be too plain with only rum, thus I have added in raisins since I have soaked 1 big tub of raisins sometimes ago that I intended to use to bake fruit cake. Not sure what will be the end result but as I like the rum & raisins ice cream from Anderson, thus I have decided that this combination should be nice too :P. 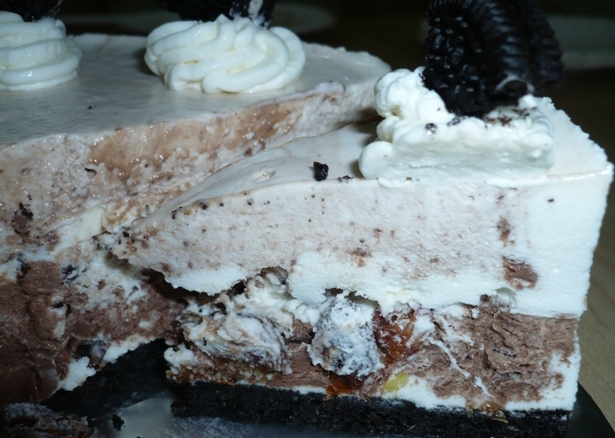 The marble swirls was not really visible cos the melted chocolate became chocolate paste which was hard to make the swirls. And also due to I have misread the recipe thus I have left only 1 tablespoon of chocolate batter which was insufficient.

Recipe taken from Aunty Yochana's blog with some modification to fit 6” cake tin.

Method:
For base
combine crushed oreo biscuits and butter together in a mixing bowl. With the back of a spoon, press and smooth evenly the biscuit crumbs onto the base of 6-inch springform pan. Chill in the fridge for at least 1 hour before you get on with the filling.

For Filling
1. Measure water into a bowl and sprinkle in the gelatin (without stirring with a spoon). Set aside to allow the gelatin grains to swell (10 mins) before setting the bowl over a pot of simmering hot water. Stir with a spoon and once the gelatin melts, remove the bowl from the pot and set aside to cool to room temperature.
2. Melt butter and chocolate in a bowl over a pot of simmering hot water
3. In your mixer, whip cream till stiff peaks form, chill.
4. In a mixer (no need to wash after whipping cream) , cream the cheese and sugar on high speed till smooth, beat in lemon juice and vanilla and follow by gelatine mixture.
5. Fold in whipped cream and mix well.
6. Remove tin from freezer and pour about 1/4 of batter into chocolate mixture, stir to mix.
7. Mix in rum & raisins with white batter.
8. Pour about half of white batter into tin, add 3/4 of chocolate batter, swirl to combine.
9. Add other half of white batter, top with remaining chocolate batter, swirling to marble patterns.
10. Chill overnight.
11. To serve, run a knife along the sides of the cake, unmould, and slice.

Verdict?
Most of them commented that the cheesecake is very delicious except my dear princess, she refused to eat after one mouth because of the rum. I think that the rum taste slightly heavy but others said it was just nice. For my taste bud, I will surely reduce the rum if making this cake again in future.
Posted by Bakericious at 7:45 PM