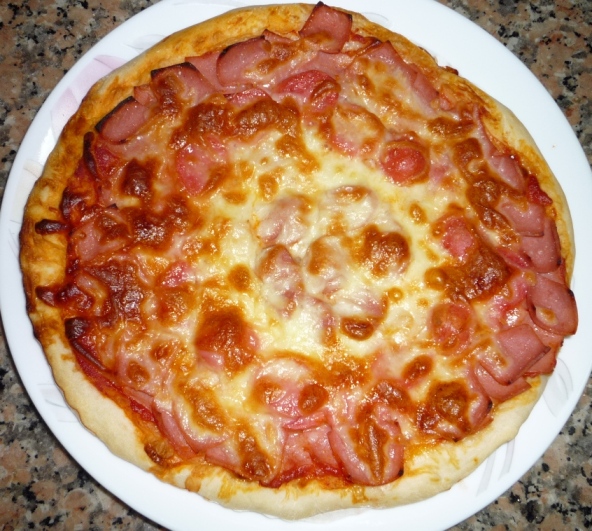 My daughter saw the commercial ad of Pizza Hut from the TV and told me she feel like eating Pizza, so I had promised her that we will have pizza for dinner during the weekend. She asked me to make the pizza myself, so that I don’t need to spend too much $ and can save more $, and she offered her help too so I will not be over tiring. I guess I have been sharing with her too much of cost saving that she is starting to have the concept. 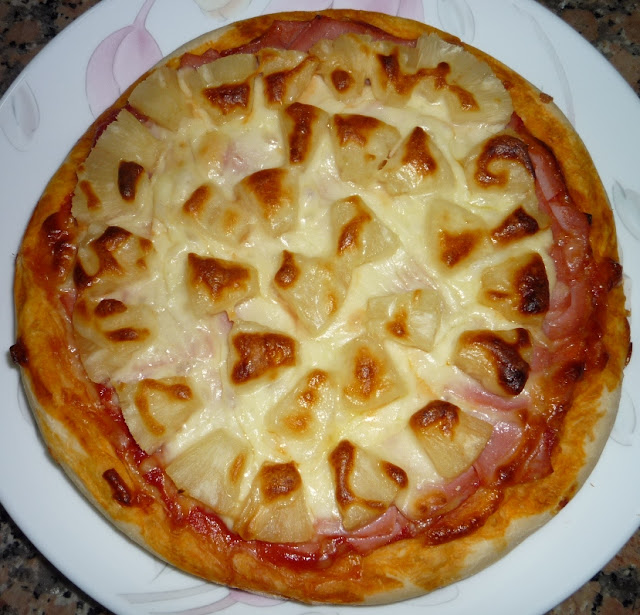 My dear husband had requested to make more so the extra can keep for breakfast the next day so I had increased the ingredients to bake 3 pizzas and I pinched out some dough to make 2 cupcake size pizza for my daughter. I had topped the pizza into 3 flavours, one was all time favourite Hawaiian, one was white button mushroom and sausage and the another one was Triple Meat which included pork ham, chicken ham, Taiwanese sausage and chicken sausage.

My heart was sunken when I was trying to remove the pizza from the parchment paper because the paper was stuck on the pizza that it was hard to remove. I am not sure why this has happened, probably because I didn’t grease the paper? We had to eat the pizza with the trimmed base but luckily that did not affect the taste.

Method:
1. Place bread flour, plain flour, salt and yeast in a mixing bowl. Mix well with hand. Make a well in the centre and add olive oil and water. Using your hand, gradually work the ingredients together to form a soft dough.

2. Turn dough out onto a lightly floured work surface and knead for 10-15mins until the dough becomes smooth and elastic. Shape dough into a round ball and place in a lightly oiled mixing bowl. Cover with cling wrap and leave to rise for 1 hr or until double in size.

3. Turn out the risen dough onto a lightly floured work surface and knock it down to release the air. Give it a few gentle kneading. Divide dough into 3 equal portions. Shape into three balls, cover loosely with cling wrap and let the doughs rest for about 10mins.

4. Roll or press out each portion to a round and place dough on baking tray lined with parchment paper or on a greased pan.

5. Spread some pizza sauce over the dough to within 1 cm (0.5 inch) of the edge. Arrange a layer of grated cheese (I used grated mozzarella), followed by preferred toppings. Sprinkle the top all over with grated cheese.

6. Bake in a preheat oven at 220 degC for 15-20mins or until the crust has turned golden and the cheese has melted. Serve warm.

Verdict?
The pizza was very delicious although there was small hiccup of the paper stuck to the pizza. My dear husband even commented that it was like real. I told him of course this was a real pizza. So he re-phrased and said it was tasted like pan pizza from pizza hut, if is not better but definitely on par and he asked me does it make me more happy.:) Of course dear, your compliments really made me feel the effort was been paid off. 
I will definate make this again but for next round, I will roll the dough thinner.
Posted by Bakericious at 11:47 PM