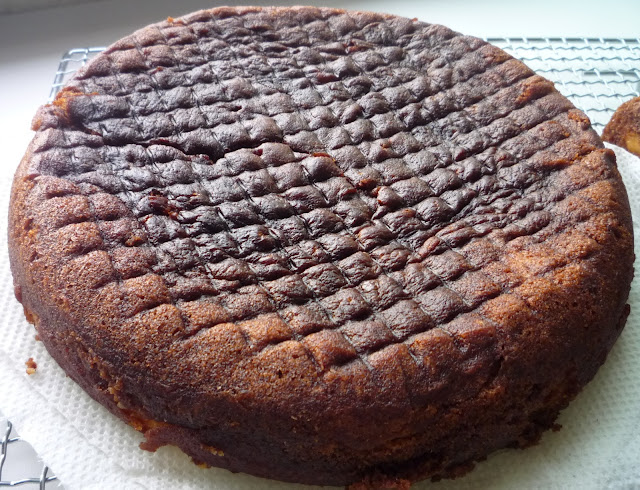 Can't really remember how many times I had baked this recipe but this is the recipe that I will keep using and using again as it is super delicious.

For this cake, my intention was to bake as the birthday cake for my Vice President. He is one of my superior that I am grateful to as he had given me opportunity and groomed me to who I am now for my career. So baking him a birthday cake is one way to show my appreciation :). I had hard time choosing a recipe as my VP is a food lover, he will always hunt around for good food. I know he likes cheesecake and his daughter can bake very good cheesecake too. I do not wanna take risk baking an untry recipe, so I can only choose for my previous baking. Thus I decided to bake chocolate swirl cheesecake as this cake has the combination of his favourite - chocolate & cheesecake.

However thing always never work out as what we have planned. I do not know what happened, probably due to I had replaced 2 eggs with 2 yolks cos I wanna use up the yolks that left from chiffon cakes, the cake just shrinked so much when out from oven. And this time round, the cakes were very oily too compared to all my previous attempt. Will it be due to I heated the butter to speed up the soften process cos the outer layer of butter was a bit melted :P. The top of the cakes were a bit burnt cos when the baking time was due, the cakes seem still under cook so I had extended the baking time for 10 mins. 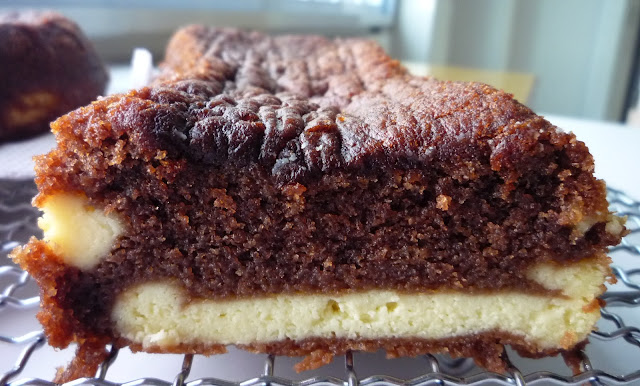 I asked dear husband whether this short cake can make as birthday cake, he said yes cos this will be the special cake. Pian, nearly wanna pull his head to knock the wall :P

I was very dishearten and at lost, dunno what should I do next. I wanted to bake again but I was afraid to get another short cake. Seek dear husband for opinion and after much consideration, I decided to make him a non bake cheesecake instead. So I asked dear husband to bring the supposed to be birthday cake to share with his colleagues, and the small one which initial intention is to let dear husband bring to office ended up in my office :)


Despite the shrinking and oily the cakes still received a lot of compliments.

1. Beat cream cheese with sugar until light and fluffy
2. Beat in egg until well incorporated and set it aside

Method:
1. Sieve flour, baking powder and cocoa together and put aside
2. Beat butter and sugar until light and fluffy
3. Add egg, one at a time and beat until well incorporated into mixture
4. Fold flour mixture and milk into egg mixture.
5. To assemble, pour half of mixture ‘B’, then all of mixture ‘A’, then followed by the remaining mixture ‘B’.
6. Bake in preheat oven at 180C for 45-50 min or until skewer comes out clean.
Posted by Bakericious at 12:48 PM