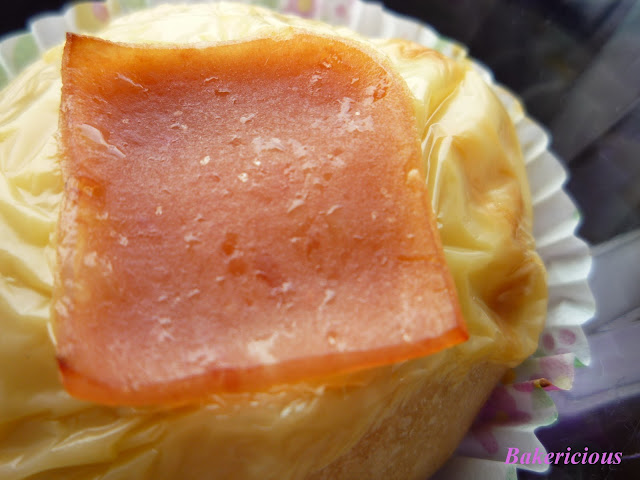 Even after the failure of previous 2 attempts on bread making, I do not intend to give up. Although felt very dishearten after each failure and told myself probably will start bread making only if I get a heavy duty mixer or bread machine. However, when seeing the soft and fluffy breads that baked by other bloggers, my heart will be bouncing actively that asking me to give another try, give a last try, dun give up so easily!

When I saw this post from Happy Home Baking and the sentances caught my attention "After kneading continuously for 30mins or so, my fingers, which were initially covered with dough miraculously came clean. The dough was really smooth and elastic, and I could even stretch it fairly thinly!" I was so excited, my urge of bread making was awake again. Both of my previous kneading of dough took more than 1 1/2 hrs and still not able to reach the windowpane test. So this recipe is definately a must to try since it took only 30 mins or so to knead the dough! I immediately bookmarked the recipe.


My dear daughter again, finished all the fresh milk so I had no choice to use chocolate milk instead so my buns came out in light brown color. 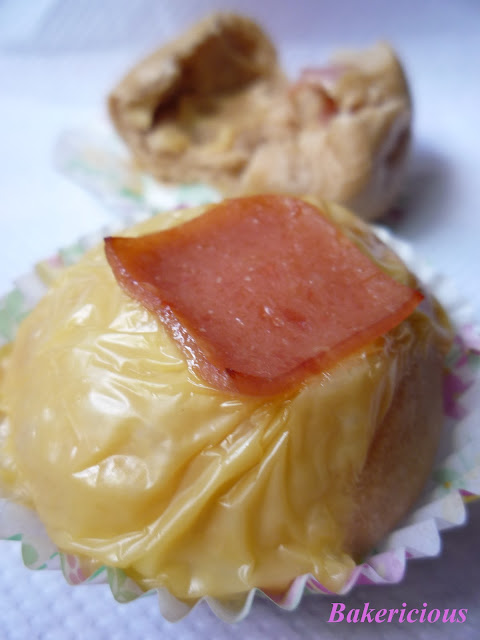 
I am not sure was it my method of kneading the dough is incorrect or due to other reason. I actually took more than 1 1/2 hrs to knead the dough and it didn't even reach the stage as what HHB mentioned that her dough was really smooth and elastic that she can even stretched it fairly thin. However, for the 3 times experience of dough kneading and all took more than an hour, this was the 1st time that the dough can stretched thinner before it tears.

Although it still did not pass the windowpane test but I stopped the kneading cos I was darn tired, shoulder and hands were aching (old aunty liao so body can't take the overwork :P). And I was running out of time, I need to go to my mum's place for weekly visit. So I just let the dough rest in the mixing bowl for proofing and brought it over to my mum's place for baking. 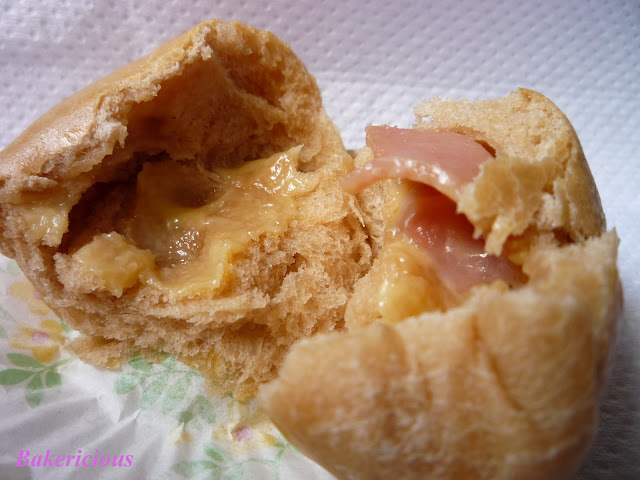 I was thinking, gosh I am going to fail again, the bread can't be soft after dusting so many times of flour and also never pass the windowpane test again. Well, I still went ahead with the baking since my guinea pigs are always so supportive. They finished the dense bread that I had produced previously and my sis even praised on my charred butter roll crisp bread :P.

As I thought this will be another failure, I dun even bother to prepare the tuna filling. I just shaped the dough into 10 balls and filled 6 balls in the 7" cake pan. For the balance 4 balls, 2 balls topped with cheese and ham, I wrapped the cheese and ham in the dough for the balance 2 balls.


I was afraid to get a charred bread again, so I monitored the baking closely. Since I am not sure how to check the doneness of bread, when the baking time was up, I just removed the buns from the oven.

I can't wait to try the bun even it was so so hot when just out from oven! I tore the cheese & ham bun into half, I saw the fluffiness texture, I was so excited but I still need final confirmation by tasting it. I quickly bite onto the bun, my smile just floated on my face instantly and I felt so satisfied. I got everyone to try the buns and kept telling them "very soft hor!", they nodded and totally agreed with me.
Horray!!! Finally I made it! :) 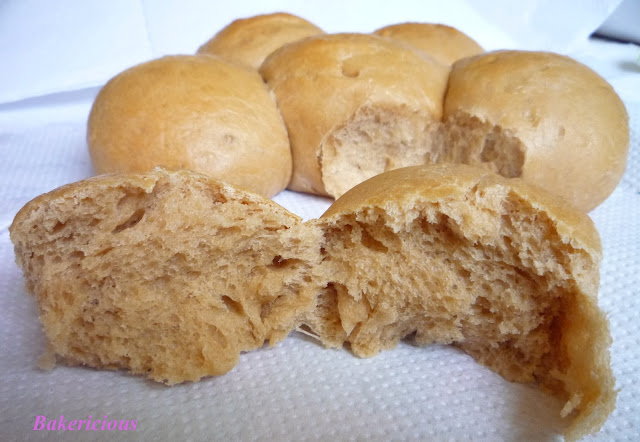 Method:
1. Stir bread flour, caster sugar, salt, and instant yeast in a mixing bowl.
2. Add in milk and egg. Mix the ingredients with hand and slowly form into a rough dough.
3. Transfer dough to a lightly floured work surface. Knead the dough till smooth. This should take about 10mins. (I took about 30 mins)
4. Knead in the butter. Continue to knead the dough until it no longer sticks to your hand, becomes smooth and elastic. This should take about another 15 to 20 mins (I took about 1 hour). Do the window pane test: pinch a piece of the dough, pull and stretch it. It should be elastic, and can be pulled away into a thin membrane without tearing/breaking apart easily. (I didn't reach this stage, my dough still able to stretch fairly thin (for me lah since compared to my previous attempts) but tore when stretched it further).
5. Place dough in a lightly greased (use vegetable oil or butter) mixing bowl, cover with cling wrap and let proof in room temperature (around 28 to 30 degC) for about one hour, or until double in bulk.
6. Remove the dough from the bowl and give a few light kneading to press out the gas in the dough. Divide into 10 equal portions, about 40g each. Roll into rounds. Cover with a damp cloth or cling wrap and let the doughs rest for 10mins.
7. Fill in your desire fillings and transfer dough to cupcake casing or greased cake pan.
8. Brush surface with egg wash. For baking in cake pan, space out the doughs to allow room for the doughs to expand. Cover with damp cloth or cling wrap and leave doughs to proof for the second time for about 30 ~ 40mins, or until double in size.
9. Bake in pre-heated oven at 180 deg C for 12 mins or until golden brown. Remove from oven and let cool completely before storing in an airtight container.

Verdict?
The buns were surprisely soft and fluffy even I was not able to achieve the windowpane test. The bun was tasty when eating in plain but tasted good when spread with butter or the filling with cheese & ham! My family given thumbs up and next morning, I toasted the cheese & ham bun to let dear husband and mil tried and they said soft and delicious. As what HHB said, this recipe is a keeper for sure.
Posted by Bakericious at 4:37 PM