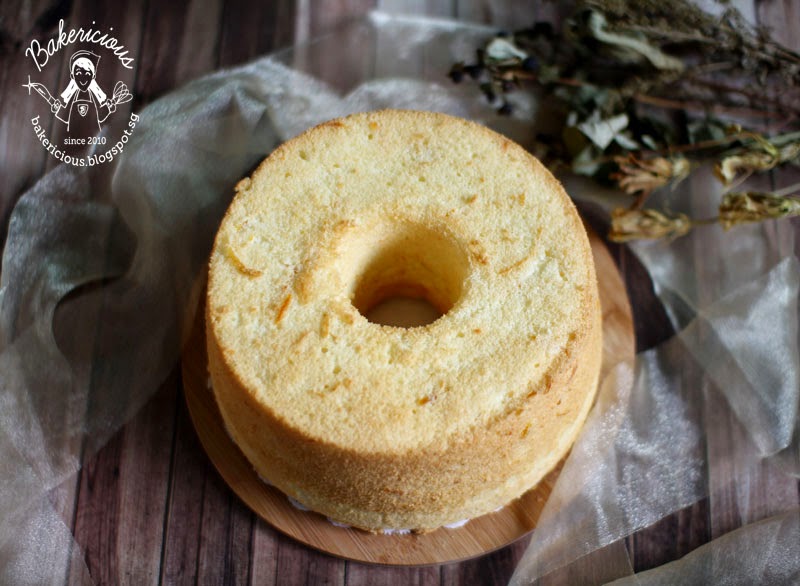 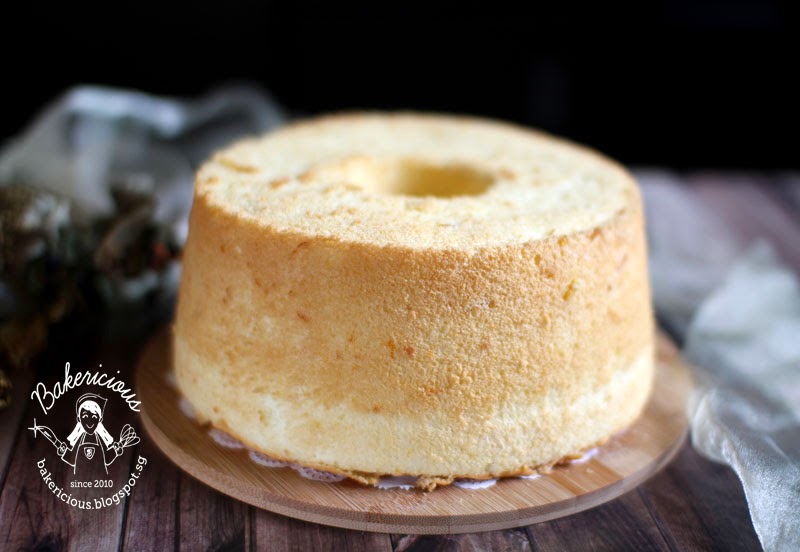 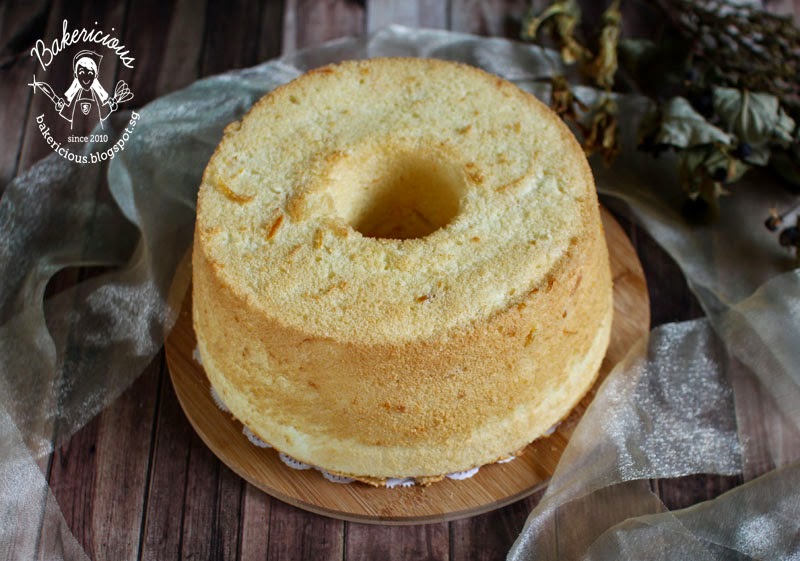 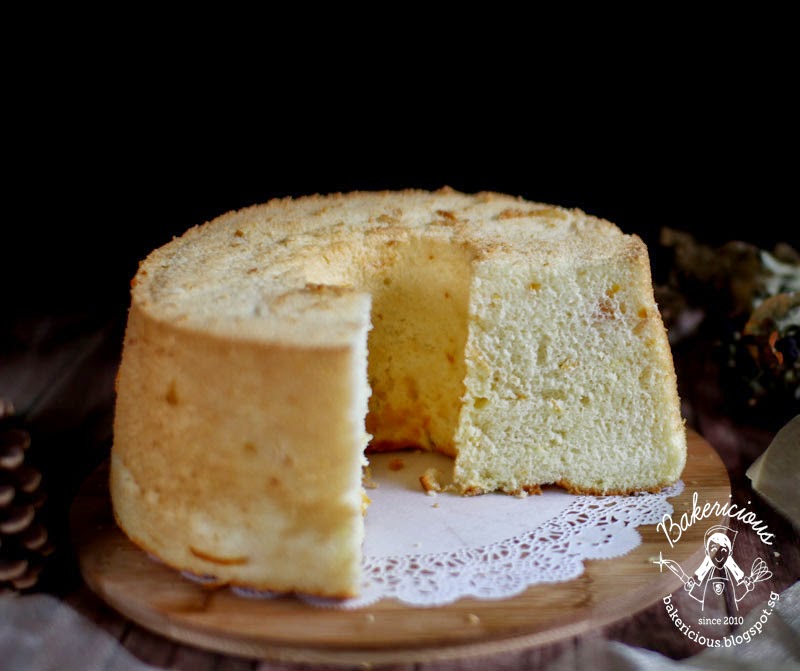 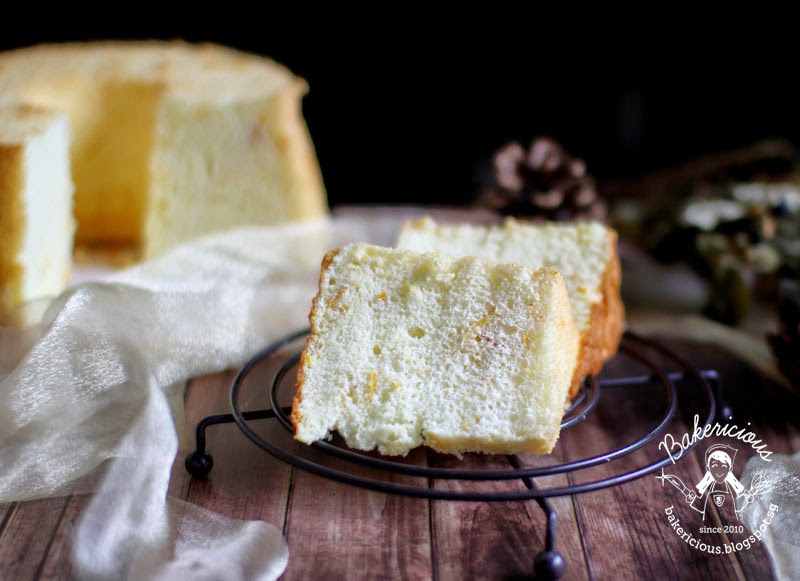 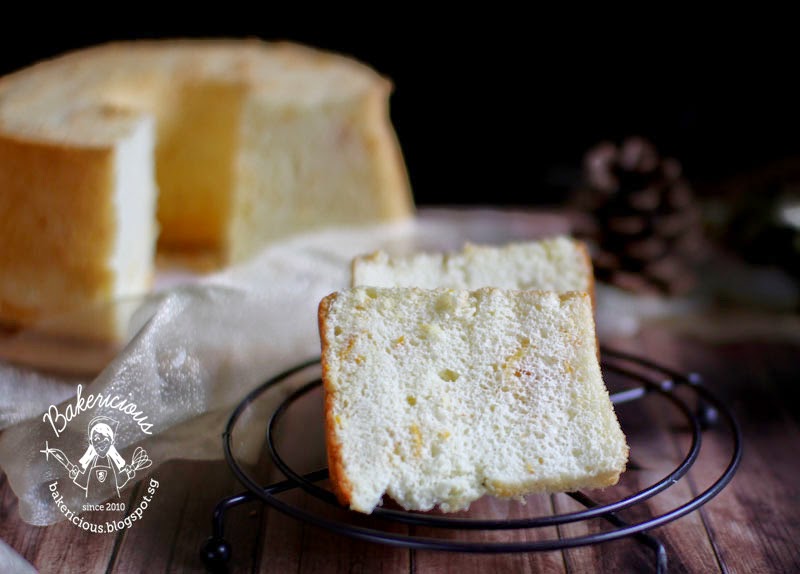 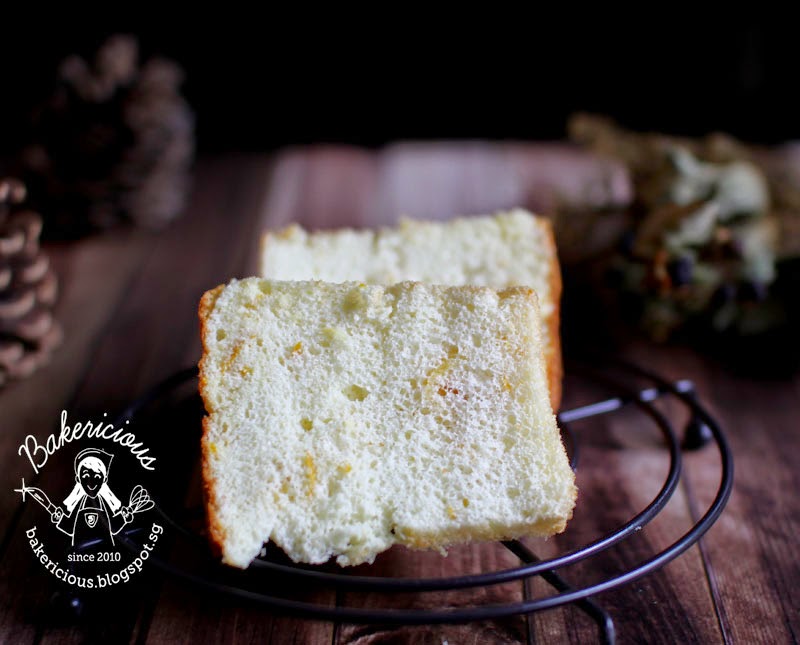 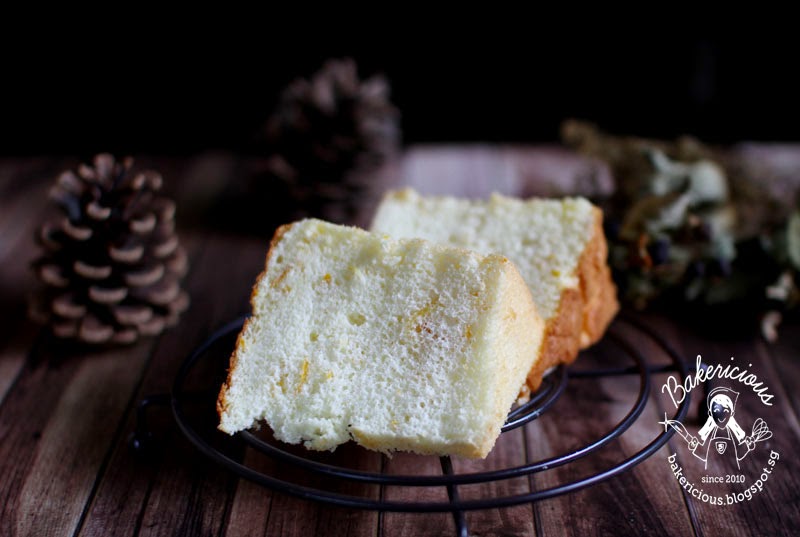 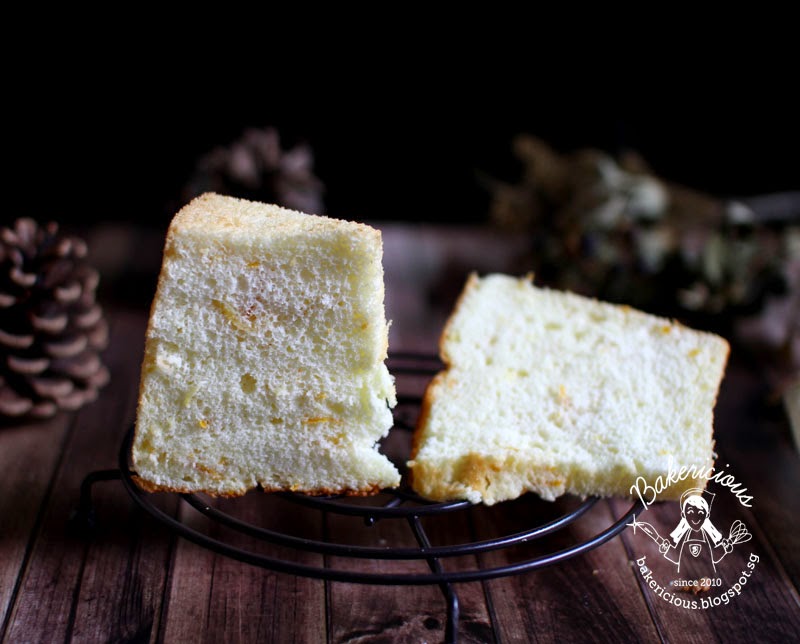 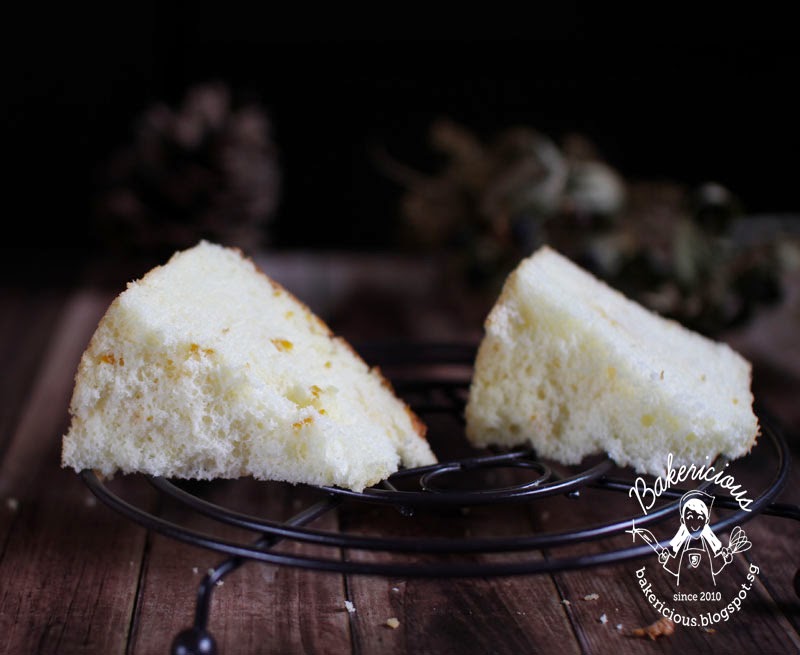 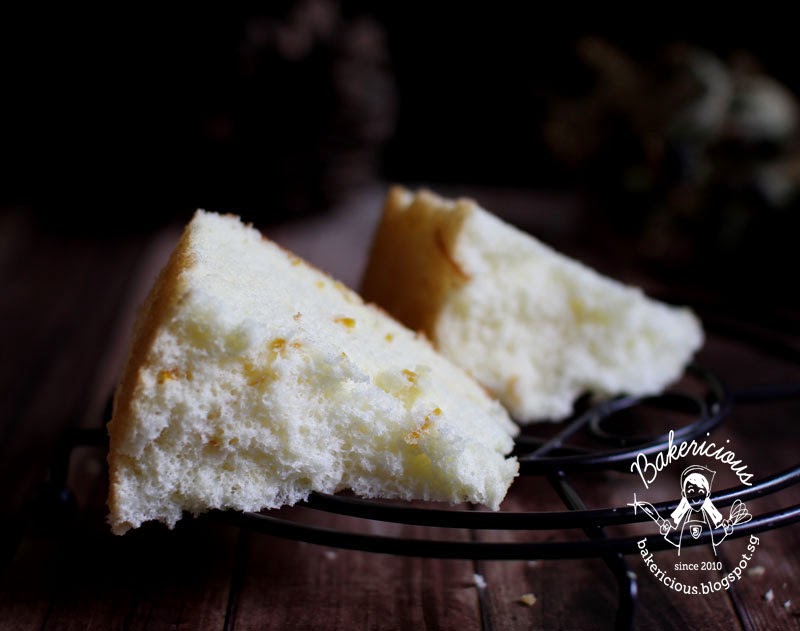 I have sleeping problem again since a week ago,  since I have hard time fall back to sleep after woke up at midnight. Instead of tossing on the bed trying hard to sleep, must well make use of the "opportunity" to prepare in advance the posts for the baking and cooking that I had done previously. So that even I am not available to do blog visiting frequently but I am still able to update blog regularly as I just need to click on the publish button before I start work :p.


Ever since my success on the golden sponge cake, I actually baked many flavors but yet to share. Then after the successful of tang mian aka cooked dough chiffon cake, I decided to give the rice flour chiffon cake a try since there are so many raving on it.

I baked orange flavor as there are many oranges in the fridge. I referred to the recipe from Joceline and Carol's "烘焙新手必备的第一本书". The baking was successful, the cake was tall and spongy and the texture is fantastic but a bit dry (probably I had over baked) and the taste, too bland for me as I don't have candied orange peels with me then. Thus, I decided to give it another try but with some modification to enhance the taste.

Recipe with modification from Butter, Flour and Me, Carol's "烘焙新手必备的第一本书" and steps from Tang Mian Chiffon Cake.

Method :
1. Sift cake flour and rice flour twice.
2. Mix egg yolks and sugar in a bowl, whisk till sugar has dissolved.
3. Add in oil, salt, orange juice, candied orange peels, orange extract and orange zest and mix well.
4. Sift in flour and whisk well.
5.In another bowl, beat the egg whites and lemon juice/vinegar till frothy. Add in sugar gradually and beat until approaching stiff peaks (meringue stand straight with a little curve at the tip) or till stiff peaks (this stage is a bit difficult to fold with egg yolk mixture).

9. Bake at pre-heated oven at 150C at center rack for 25 mins and 160C for 15-20 mins. (I off the top heat element and on it back during the last 15 mins)
10. Remove the cake pan from oven, drop it from high side to prevent the cake shrink too much during cool process.
11. Turn the cake pan upside down and cool completely before remove from the cake pan.

Verdict?
The cake is so soft, fluffy, fine texture and moist, can fight with the tang mian method. I fall in love with this method, it gets the similar result as tang mian but do not require to cook the dough, save time and gas right lol. When I ate the cake during the same day of baking, I was not satisfied with the taste as I still finds the orange taste is not strong enough. However when I tasted the cake next day, the taste became stronger and better. The cake is still soft and moist even after chilled, nice to eat while is still cold. Everyone given compliments on this cake which they think the texture and taste is very good. My buddy M who is tang mian's fan, after tried my recipe, now fall in fall with this rice flour recipe too. Double thumbs up! I have used this recipe to churn out many flavors, my favourite recipe now :D!

I'm linking this post to Cook-Your-Books #15 organised by Joyce from Kitchen Flavours. 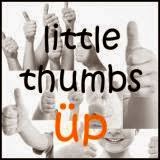 This post is linked to the event, Little Thumbs Up organised by Bake for Happy Kids and My Little Favourite DIY, and hosted by Diana from The Domestic Goddess Wannabe

Posted by Bakericious at 8:05 AM